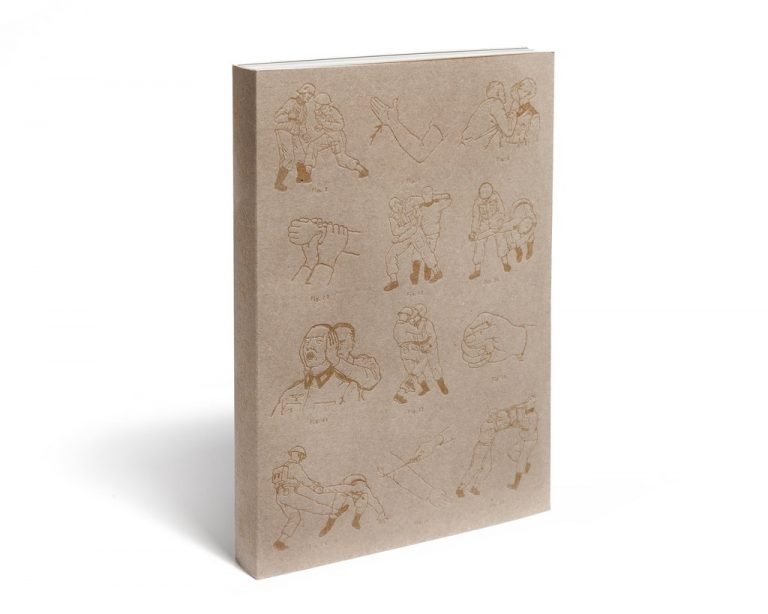 The seacoast of Normandy churns with history.

In this visionary rite of images, texts, and scientific data, photographer Donald Weber, writer Larry Frolick and physicist Kevin Robbie explore the sand beaches where the D-Day invasion was once fought, inch by inch, hand to hand. Their task was to gather forensic evidence, and determine the fate of this legendary battle over time.

The war-relics presented here create an immersive experience on the theme of collective memory. They include WWII spy-craft and old Hollywood movies, dioramas and drone-mounted cameras, private post-war memoirs and wistful seaside photographs. These artifacts reveal war’s quantum traces. And they expose our civilization’s longing for a final victory over death.

War Sand seeks a great truth: What is history?

And what does it mean to us, its creators and survivors?

WAR SAND
And the Nine Commandos

The story my grandfather told me, goes like this.

During New Year’s 1943, nine British commandos were ordered to cross the English Channel and surface on the beaches of Normandy in France. The mission was to covertly collect sand and soil samples along a vast stretch of coast.

They had two days and nights to cross the Channel, collect the samples, and return without being caught.

France, and the seacoast in particular, was thick with German forces. The Atlantic Wall, Hitler’s dream fortress, was a wall of pure concrete, guarded by massed artillery and elite soldiers. To be caught meant certain execution as spies.

​
If the commandos made it back to Britain, the samples would undergo scrutiny by scientists, geologists and physicists. Supreme Allied Commander Eisenhower and Field Marshal Montgomery were counting on these minuscule grains of sand to withstand the weight of an invasion force, the largest the world had ever seen.

Thousands of ships, soldiers and armaments would land on Normandy’s beaches for the liberation of Western Europe. But first, the commandos had to complete the mission.

At the end of his story, my grandfather opened a small wooden box, and unwrapped a small glass tube from a white linen cloth.

It contained a pinchful of grey sand.

“This is what we brought back.”

“Through the use of microscopic photography and with a kind of forensic inquisitiveness and existential wondering, Weber brings us close to these fragments, offering us, too, the longer view: the eerie hush of the beachhead and the expressionless features of the sea and sky, edged in grasses. The series invites a contemplation of the endless quiet that lies beyond the flare of bold historical events, offering a cautionary tale of the hubris of humankind.”

We use cookies on our website to give you the most relevant experience by remembering your preferences and repeat visits.
By clicking “Accept”, you consent to the use of ALL the cookies.
.
Cookie SettingsAcceptReject All
Manage consent

This website uses cookies to improve your experience while you navigate through the website. Out of these, the cookies that are categorized as necessary are stored on your browser as they are essential for the working of basic functionalities of the website. We also use third-party cookies that help us analyze and understand how you use this website. These cookies will be stored in your browser only with your consent. You also have the option to opt-out of these cookies. But opting out of some of these cookies may affect your browsing experience.
Necessary Sempre abilitato
Necessary cookies are absolutely essential for the website to function properly. These cookies ensure basic functionalities and security features of the website, anonymously.
Functional
Functional cookies help to perform certain functionalities like sharing the content of the website on social media platforms, collect feedbacks, and other third-party features.
Performance
Performance cookies are used to understand and analyze the key performance indexes of the website which helps in delivering a better user experience for the visitors.
Analytics
Analytical cookies are used to understand how visitors interact with the website. These cookies help provide information on metrics the number of visitors, bounce rate, traffic source, etc.
Advertisement
Advertisement cookies are used to provide visitors with relevant ads and marketing campaigns. These cookies track visitors across websites and collect information to provide customized ads.
Others
Other uncategorized cookies are those that are being analyzed and have not been classified into a category as yet.
ACCETTA E SALVA
X